Currently, RCS is taught through private seminars, larger scale contracts, and soon online training and DVDs.  It contains both defensive and aggressive interceptive actions, as all checks against the enemy's kicks or punches are delivered as strikes to vulnerable nerves.
Our law enforcement students have recognized this training as POST.  Our military students recognize these techniques as MCMAP or as ARMY COMBATIVES.  The program is based upon the idea that every human body reacts in the same way to specific injuries, and the program puts together various strikes to specific nerves, bones, and organs in order to debilitate an aggressive individual. The goal is to produce an "auto kinematic reaction", which is a medium-term extreme level of pain. The three main elements of RCS are geometry, physiology, and physics, and void of the spiritual aspect that is prevalent in many martial arts. It focuses on immediate threat elimination and does not include an element of spiritual development.

RCS is not a traditional martial art—in fact, we don’t use the term “martial art” at all.  Traditional martial arts tend to be rigid, dogmatic, and focused on maintaining traditions handed down from past masters.  In addition, depending on the art, there is an emphasis on elegance of movement and minutia of detail.  RCS tries to avoid all these things.  The majority of martial arts systems also tend to become trapped in a sports-oriented mentality, establishing rules that limit the fighters.  Even mixed martial arts fighters, many of whom are our friends and whom we respect immensely, fight in a controlled environment with restrictions on what they can and cannot do.
Some very effective systems can also fall into the sports-oriented trap.  For instance, Brazilian jujitsu (BJJ) is an extremely effective system.  Anyone interested in becoming highly proficient at ground fighting should absolutely spend time training with one of the many Brazilian jujitsu instructors available around the world.  However, many schools teach BJJ as a sport, no striking, no biting, no eye-gouging, and no emphasis on getting up and away from danger.  The truth is, these limitations are necessary in order for beginners to practice the techniques.
This is where RCS is different.  We certainly create training drills and training methods that limit student options…but we constantly remind them that they should not be fighting by the rules.  For example, they should look to disengage and run away, or find an object to use as a weapon.  We have no interest in proving to ourselves or the attacker that we can do a particular technique.  Our only interest is in going home safely.
RCS is a zero counter solution, which leaves no room for the idea you are in a “fight”. The whole purpose of RCS is the phrase we coined “threat elimination”. You do not allow your threat to complete their task; you do not allow your threat to do what they are good at.
RCS is heavy on the “martial” and not much into the “art.”  In fact RCS is commonly nicknamed “DIRTY MMA”.  We aren’t always pretty, but we get the job done.  We prefer to describe RCS as a “defensive tactics system”—a tactical and logically sound approach to dealing with violent confrontations. 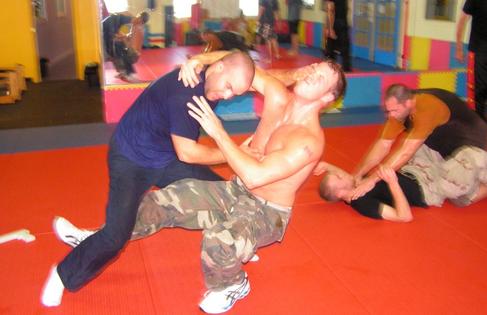 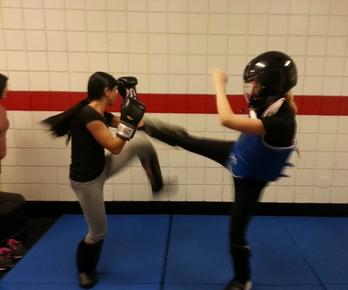 REALITY COMBAT SYSTEM is based on sciences of psychology, physiology, physical movement as well as research on the nervous system.

RCS was developed by Carlos C. Gomez after serving on special units within the Los Angeles Police Department, and working domestically and abroad as an Executive Protection Agent/Close Protection Officer. Mr. Gomez’s own experience prior to his career training and street experience stems from achieving instructor level certifications in Hwarang-Do, Sulsa-Do, Krav Maga, Muay Thai, and Greco-Roman/Pankration wrestling.  RCS has been taught to various military, law enforcement, and security units.